This article is part of a 5-part series on food labels coming to The University of Texas’ Nutrition Department’s Blog.

For many consumers, food labels are a primary source of information about the foods and products they eat. Because of this, it is important that these labels are trustworthy, and that companies are held accountable for the claims printed onto their products.

First, to understand the importance of food labels, let’s look at why food labels were created.  Originally, food labeling emerged as a safety precaution for consumers due to foodborne illness outbreaks in the 1850’s. One of the most notable deaths related to food borne illness at this time was the death of President Zachary Taylor after consuming contaminated fruit and milk at a picnic.  After this highly publicized death, the United States Department of Agriculture (USDA) was created in 1862 by President Abraham Lincoln which led to the creation of strict guidelines for food handling and processing. However, it would be 128 years before a recognizable nutritional facts panel was mandated on all food products.

With the mandate of ingredients on food products, many food companies also began to add health claims to their packaging; yet most of these claims were misleading or lacking thorough research. In 1973, the issue of false health claims reached the Supreme Court, which ultimately ruled that nutrition facts as mandatory on all foods boasting any health benefits such as low fat, reduced cholesterol, or heart healthy. Additionally, any food that made any claims about preventing or curing a specific disease were actually considered an illegal drug.

A few decades later in 1990, the USDA mandated that all food companies were required to make consistent claims and include a detailed, standardized nutrition facts panel on all products intended to be sold. This panel would include information such as the amount of calories, fat, cholesterol, sodium, carbohydrates, and protein, as well as select vitamins and minerals and has become the familiar black-and-white table, iconic in today’s foodscape. 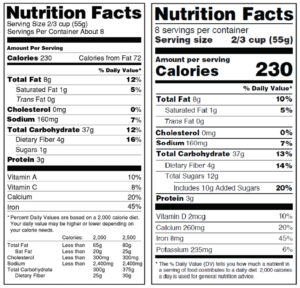 Stay tuned for the next part of this series about anticipated changes coming to food labels.

We’re ready to answer your questions.

By submitting this inquiry, you agree to be contacted by representatives of the University of Texas Austin by phone, text or email in order to receive information about our programs.

Applications are reviewed on a rolling basis until the final deadline, October 1, 2022.